After watching Darren Kuropatwa’s #WhileWalking 66  posted by Amy Burvall in Google+, I started thinking about tags as a part of digital literacy. I am not a very good user of tags.  I have been struggling with choosing consistent, clear tags since Delicious switched away from stacks.

“Blogging tips” websites indicate that you should do some research to find the most commonly used terms in your field.  However, finding a list of keywords or tags for Educational Technology through a Google search is an exercise in futility since all sites include the word “tag”. Instead I did a very haphazard, non-academic search of tags people are using on their blogs  to find the most common. Using Tagxedo, I found the top 100 tag words look like this (see below for how this image was made): 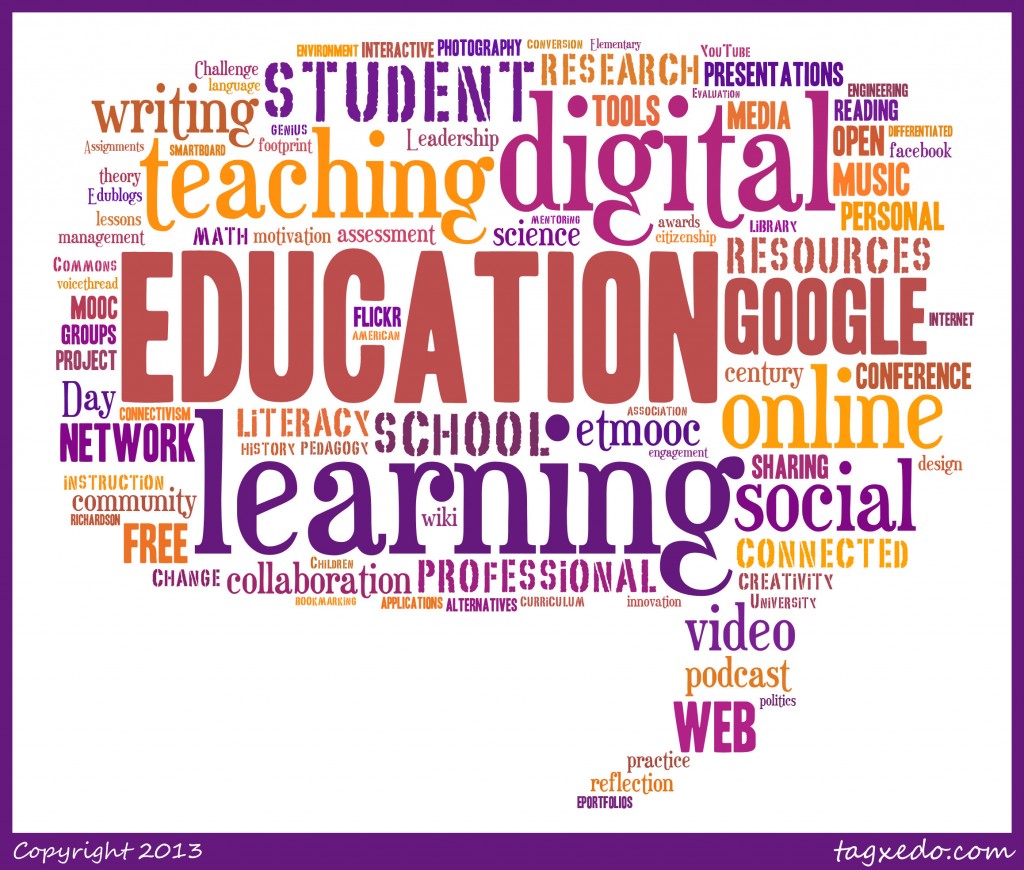 Since Tagxedo only uses individual words, the compound word tags are not shown, but this image does give an overview of what we are talking about. As I make my tags in the future, I will endeavour to use these words alone or in combination in addition to my own idiosyncrasies.
Out of curiosity, I fed the ETMOOC blog feed into Wordle and this is the image created. It will be interesting to see what will change as we move into Digital Literacy. 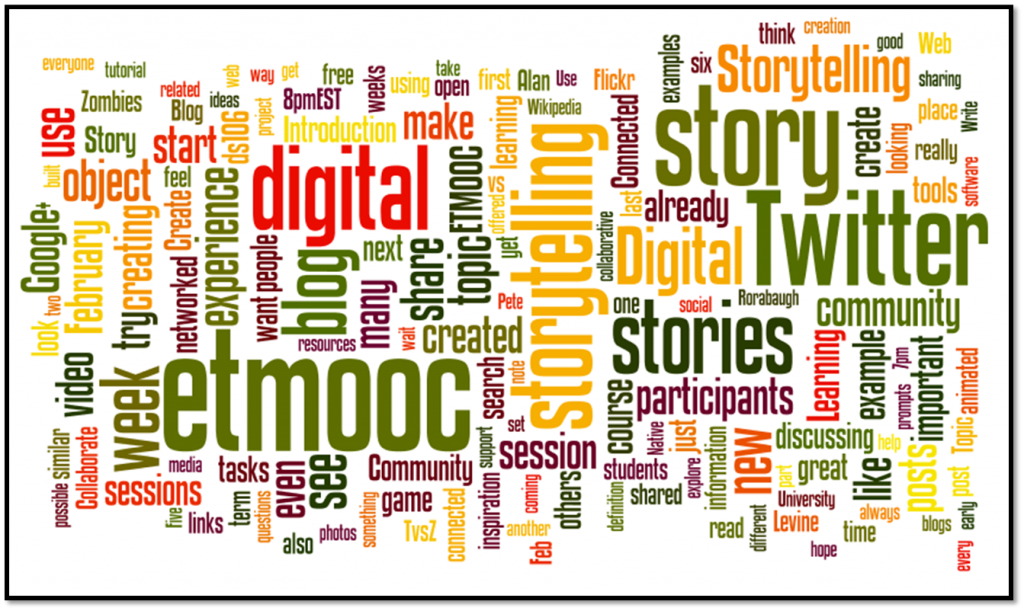 How I made the Tagxedo:
I thought that I would be able to see tags on other people’s blogs. This turns out to be more difficult than it sounds since many blogs do not list their tags. Visiting at least 100, I copied the tag lists  from 33 blogs  into a Word document. To choose the blogs, I started with the current postings (on Feb. 17, 2013)  in the ETMOOC blog hub feed. Then I looked through all the blogs from James Dykstra’s  (@mrpuffin) Twitter list of Canadian Educational Folk. I also added a few blogs from people I follow. Once I felt I had enough “data”, I copied the full Word document into Tagxedo. The application automatically choose the most frequently used words.
The blogs I used to make this tag cloud of tag cloud words:

This is a picture for Gemma Holtam’s “Choose your own adventure” digital story for ETMOOC. Looking forward to seeing what comes from it! As part of Digital Storytelling for #etmooc, we were challenged to make an animated GIF. I’m pretty happy with the result. It shows the action, excitement and effort of the final game of the season.

I struggled with using Gimp. Truth be told, I struggle with all photo editing. The pictures were too big, the scale was different in each picture, there were other players in the frame that flash awkwardly in the animation and it was just ugly when done. Finally, I gave up and went to the iPad. I searched for a highly ranked free photo editor that also made GIFs and settled on Fotorus. Then I dropped the images in Dropbox on my computer and saved them to the camera roll from Dropbox on the iPad. In Fotorus, I cropped all the images so my son was the same size, then used the auto-enhance so the colours were similar. Next I pulled them all into the GIF editor and chose the “matrix” filter.

Making the GIF on the iPad was quite easy, but I was frustrated with getting it off the iPad. The app easily saves to Twitter, Facebook and Tumblr, but GIFs do not show in the camera roll and the email was empty that I sent myself. Eventually I posted it to Twitter and downloaded it from there onto my computer to be able to post it here. Whew. Workflow on the iPad is crazy sometimes.

I have updated my Prezi that I use to introduce teachers to blogging to include teacher and class blogs by subject area. Since I work with secondary school teachers, they often want to see an example in their subject. If you have or know of a great class blog that I should include, please let me know in the comments.

Island Journey Reprise by Ivan Chew is licensed under a Attribution Noncommercial (3.0).

While looking for a background image for my about.me page, I was enjoying my pictures of Italy from the summer of 2011. One of the highlights of the trip was a visit to the Blue Grotto on the island of Capri. I appreciated Serge Puchinsky’s post about the Advanced Blogging webinar and how he plans to put into practice what he has learned in ETMOOC for his posts. So I challenged myself to make a video about this amazing experience. The people we shared a boat with had been to Capri 3 times before but could not get into the cave because the waves were too high but we had perfect weather.

My friend insisted that I had to wear capri pants in Capri, so I did (even though it was much too hot!) 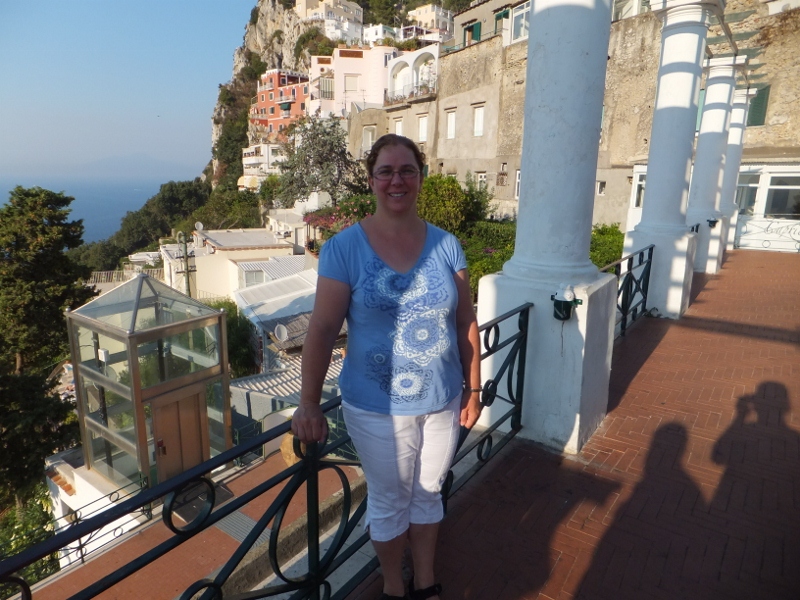 I tried using Youtube’s video editor but was not able to add pictures along with video. Instead, I made a Windows Live Movie Maker video. I would never have chosen WMM a couple of years ago over a web tool, but Movie Maker has become really intuitive and has many features that allow you to personalize your video. It probably would have been easier to make an Animoto, but it’s great to try new things and learn new skills!

You can read more about the Blue Grotto here. This is a video that shows where the light actually comes into the sea cave under the water:

Stop motion video in my backyard a video by Susan Campo on Flickr.

This was taken at twilight on at the end of a beautiful Sunday by using My Stop Action app. The ability of these apps to make it so easy to create quality products still amazes me. This makes it possible for students to spend less time on the technology and more time on discovering and demonstrate knowledge and skills.

This Popplet was created for a PD session on the use of personal devices in classrooms. By no means is it an exhaustive list of activities that incorporate students’ devices–just a few suggestions. Pick one and start!